By TRUECOSMOSNovember 19, 2019NEWS
No Comments

What’s so attractive about magnetic refrigeration?

Magnetic refrigeration has the potential to reduce energy use by 30% and requires no refrigerant. Metkel Yebiyo and Graeme Maidment, of Sirach, describe the technology, its main applications, and the challenges facing firms trying to get the concept to market

At the 2015 United Nations Climate Change Conference, COP 21, in Paris, world leaders negotiated to limit global warming to below 2°C by 2100. The talks were aimed at avoiding serious climate catastrophes around the world, and participants sought to reduce greenhouse gas emissions by increasing the use of zero carbon technologies.

Magnetic refrigeration is one such emerging, innovative and potential low carbon technology. The interest in it as a new heating or cooling technology – and as an alternative to conventional vapour compression – has grown considerably over the past 15 years.

The principle of magnetic refrigeration is based on a phenomenon known as the magnetocaloric effect (MCE). Discovered by Emil Warburg in 1881, this was related to the property of exotic materials – such as gadolinium and dysprosium – that heat up when a magnetic field is applied to them and cool down when the magnetic field is removed.

There is no possibility of refrigerant leakage and no direct CO2 emissions, so magnetic refrigeration fully complies with all regulations

It can be seen from Figure 1 that, by operating the magnet in four steps, it is possible to extract or reject heat and produce heating or cooling. The energy (E =m.Cp.ΔT) generated during each magnetocaloric cycle depends on the variation of temperature (ΔT), the mass of material (m) and its specific heat capacity (Cp). This effect is maximal at a specific temperature – called the Curie temperature – of the material.

The main limitation of the magnetocaloric system shown in Figure 1 is the relatively small temperature difference that can be achieved between the cold and hot source.

A number of techniques have been used to increase this exchange, including active magnetic regenerative refrigeration (AMRR). The principle of this cycle uses a heat-transfer fluid – in contact with the magnetocaloric materials (MMC) – flowing from the cold side to the hot side when the MMC is heated (magnetised), and from the hot side to the cold side when the MMC is cooled down (demagnetised). This progressively increases the temperature difference between the cold and hot source to about 20K, making the system potentially suitable for commercial applications.

There are various potential applications. Initial developments have been orientated towards the commercial and domestic refrigeration markets, and include display cases, beverage coolers, and commercial or domestic fridges.

However, magnetic cooling can also be adapted to other refrigeration applications, such as air conditioning (including automotive), cryogenics or in heating systems – for example, heat pumps. 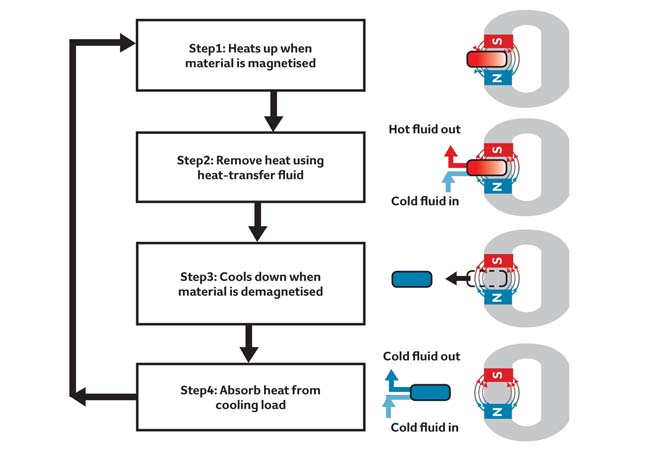 In addition, the magnetocaloric cycle frequency is typically between 1Hz and 3Hz, so the rotation speed of the machine is slow and, therefore, very quiet compared to traditional compression systems. According to recent research, MCE is predicted to have a significantly higher efficiency (coefficient of performance) than the present conventional methods, with the potential for a 30% energy saving.

Even though some products have come to market, there are still challenges that need to be addressed before there is large-scale deployment of the technology. The main issue is the supply of magnetocaloric materials, which are scarce. Reducing the material content, or identifying new materials, would increase viability. 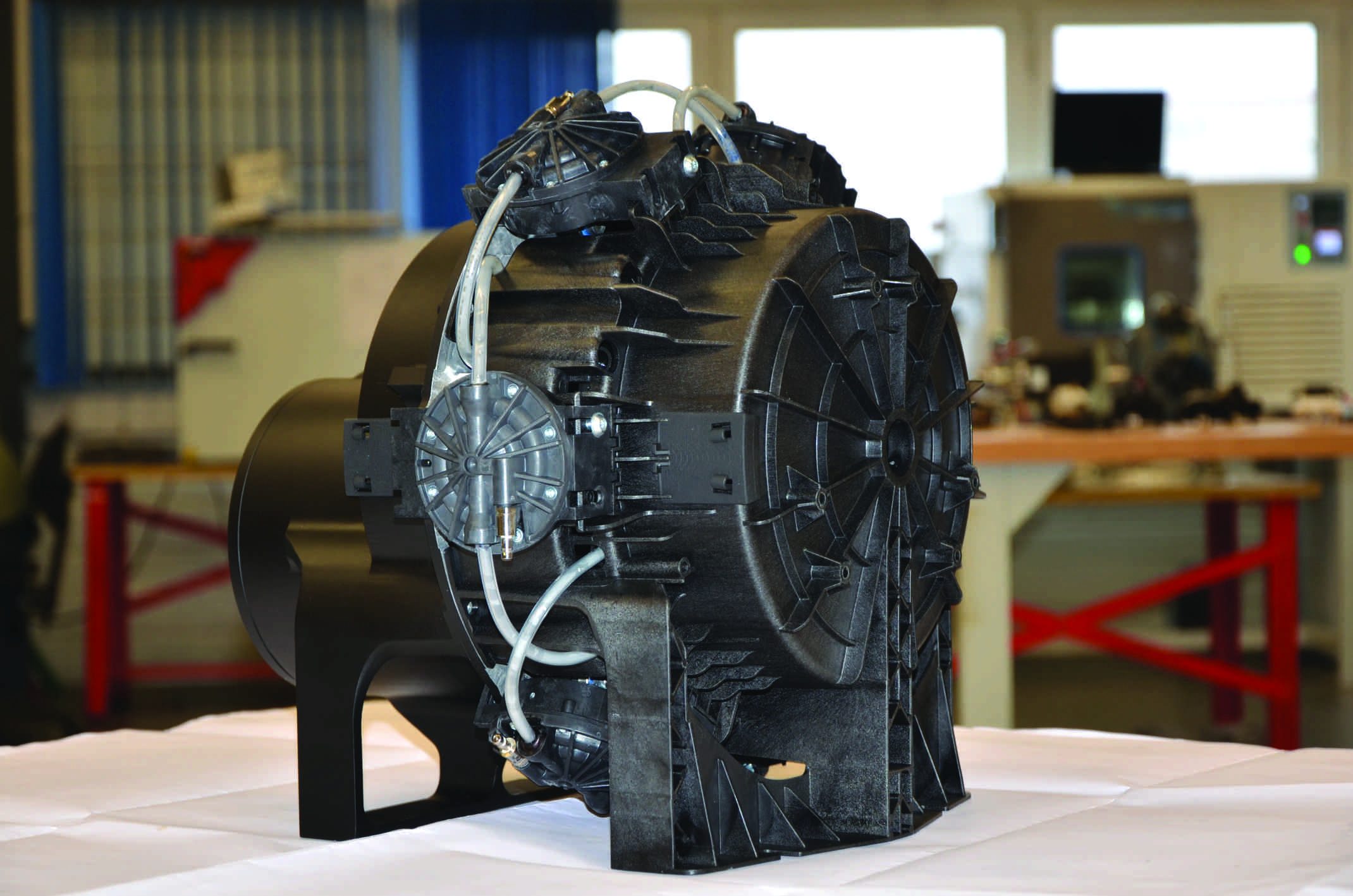 According to magnetic refrigeration engineers Cooltech Applications, the fabrication process is not yet optimised and production costs are still high. Interface optimisations (for example, heat exchangers) between the devices and the equipment to be refrigerated also need to be modified for maximum efficiency. Finally, development of prototypes for various specific applications needs to take place.

Although there is a lot of academic work by scientists and engineers at universities and research institutions worldwide, the current market development is not fully mature. Some of the companies pushing the boundaries of this technology include Cooltech Applications and Nextpac, which is working on heat-pump applications.

In 2015, Cooltech Applications said it had produced a 150-700W product as part of a refrigeration system (see Figure 2), and the first tests will be carried out at end users’ sites, such as supermarkets, this year.

Magnetic refrigeration is very promising. It is not yet ready for market, but it is a technology to keep an eye on over the next five to 10 years. Its potential to reduce energy use and operate without environmentally impacting refrigerants makes it an exciting proposition.

This is the first in a regular series of articles by Sirach’s Metkel Yebiyo and Graeme Maidment, looking at emerging heating and cooling technologies. Sirach aims to provide industry and academic researchers with the opportunity to promote new carbon-saving technology. Sirach holds regular meetings at leading universities and businesses that engage in research. On 20 April, it will visit the Centre for Sustainable Energy use in Food chains (CSEF) at Brunel University. For more information, or to be included on the Sirach mailing list, please register at www.sirach.org.uk or email [email protected]