By TRUECOSMOSDecember 8, 2019NEWS
No Comments

Earlier in 2017 Seagate announced that the first hard drives using Heat-Assisted Magnetic Recording, or HAMR, will ship to key customers by the end of 2018.

We’re now announcing that, in fact, Seagate is already shipping HAMR units for customer integration tests — and the results are as we expected. The HAMR drives are as simple to integrate and operate similarly to any traditional drive. They’ve passed qualification tests with the predictability we’ve engineered into the drives.

Our successful HAMR tests confirm our products are plug-and-play, reliable, and ready to ship in pilot volume next year:

HAMR is a technology designed to enable the next big increase in the amount of data that can be stored on a hard drive. It uses a new kind of media magnetic technology on each disk that allows data bits, or grains, to become smaller and more densely packed than ever, while remaining magnetically stable. A small laser diode attached to each recording head heats a tiny spot on the disk, which enables the recording head to flip the magnetic polarity of each very stable bit, enabling data to be written.

In this short video, I describe the crux of the need to evolve from PMR (perpendicular magnetic recording) to HAMR:

Why the push to deliver ever higher data density?

And IDC continues to reiterate that hard drives will be central in managing 70 percent of the datasphere. In other words, the future is very bright for hard drives, assuming the technology continues to offer massive capacity. HAMR is the next technology to increase data density on the roadmap that’s been defined by the major storage technology providers, as part of the Advanced Storage Technology Consortium (ASTC), representing the industry consensus. 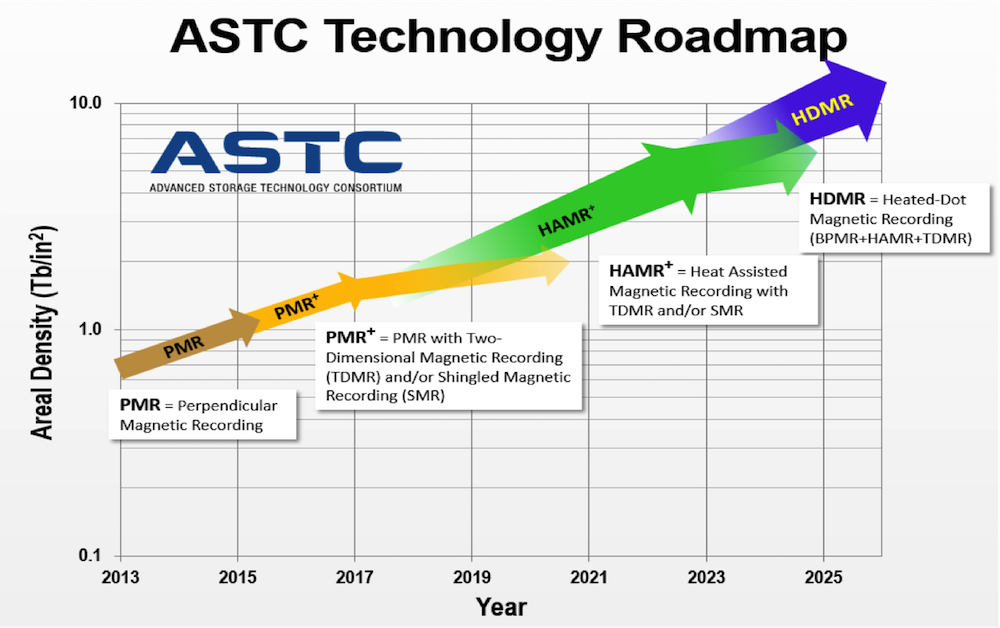 Seagate has long been the leader investing in the future of hard drive technology to address the various pain points within the data center. Seagate is laser-focused on areal density innovation to support the ever-growing exabyte demand. Seagate also continues to lead the way to scale up performance innovating advanced technologies to improve IOPS and latency, and to address TCO requirements with technology-level innovation through Helium, SMR and other initiatives.

HAMR delivers the only path to areal density leadership

Although Seagate is typically ahead of the curve in delivering new capacity points, Seagate’s technology introductions are consistent with the ASTC view on technology migration. The ASTC roadmap shown above illustrates ASTC’s view of how recording technology will migrate from one technology platform to the next. Seagate’s introduction of HAMR in the coming year reflects this consensus.

In the image, the tips of the colored arrows indicate the approximate data density capability expected from each technology. ASTC has defined a formal criteria for measuring the validity of new technology demonstrations, including how areal density will be measured.

It’s clear HAMR is the only technology being researched and tested today that can provide the necessary next step in areal density. With the limits of PMR (perpendicular magnetic recording) upon us, HAMR brings us fully back on the path of areal density growth. It’s the only near-term technology capable of ultimately enabling 10 Tbpsi when paired with BPMR (Bit Patterned Media Recording), for a 10x improvement over PMR over the coming decade.

HAMR is on track to deliver 20TB+ drives by 2019, and to continue thereafter with a forecasted 30 percent CAGR (compound annual growth rate) in data density to achieve 40TB or higher by 2023. This rate of growth in data density is unique to HAMR, and is crucial to ensure a continued advantage in TCO that data centers require from hard drives. In fact, although new HAMR components add some cost on a per-head basis, HAMR drives as a whole can deliver a reduced cost-per-TB compared to PMR drives because of the sheer increase in total capacity per disk.

Paired with SMR (Shingled Magnetic Recording) and TDMR (Two-Dimensional Magnetic Recording), HAMR can provide the industry with the best cost-per-TB, and paired with parallelism techniques, performance can scale alongside capacity increases. The benefits of HAMR products cross all segments; HAMR enables both client and enterprise product swim-lanes to grow with the capacity and performance demands of each market.

Ten years ago, the development and delivery of new head and media designs for HAMR seemed complex. We needed to define and develop new media coating that would be magnetically “hard” enough to prevent ever smaller bit grains from randomly switching polarity, but which was “soft” enough that it could be easily, quickly heated and cooled to enable those bits to be switched by the recording head. And then there were the questions of how to integrate laser diodes and near-field transducers into recording heads.

Compared with legacy technology, adding a laser to every head is complicated. But Seagate’s industry-leading research and development team has solved one question after another — and in the end, our HAMR architecture today is simpler than any other approach for delivering higher data density after PMR.

To date we’ve built and tested more than 40,000 HAMR drives (and we’ve built millions of HAMR heads). These drives have demonstrated the ability to reliably transfer over 2PB of data on a given head; this equates to 35PB of data transferred in a five-year life on a 12TB drive — far beyond any real-world application expectations. And despite early concerns among some industry watchers, no wear-leveling is used in Seagate HAMR drives, nor is it needed to achieve the reliability we’ve demonstrated.

The reliability of glass media used in HAMR drives is well-established and Seagate is the leading expert in media development and manufacture. Our current glass media supply chain has demonstrated 2.5M MTBF with shipping product.

Power, heat, and the reliability of related systems is equally nominal. HAMR heads integrated in customer systems consume under 200mW power while writing — a tiny percentage of the total 8W power a drive uses during random write, and easily maintaining a total power consumption equivalent to standard drives. Thus, no increase in drive temperature occurs. Of course, in a HAMR drive, the media is heated by the laser diode during the write process — but each bit is heated and cools down in a nanosecond, so the HAMR laser has no impact at all on drive temperature or the temperature, stability, or reliability of the media overall.

The bottom line: Our HAMR drives will meet the same data center reliability requirements as a PMR drive.

Beyond the reliable design and proven capabilities of our early HAMR units, we’ve also developed and deployed the reliable manufacturing infrastructure necessary to launch in volume. With HAMR drives already being made in our manufacturing facilities, our internal and external supply chain is solidly in place, and volume manufacturing tools are online.

So, as I mentioned in the opening — having brought to bear the expertise of our R&D, product development and engineering test teams to make HAMR a reality, this year we began shipping initial units for customer tests, as we prepare final product to ship in 2018.

The results are in. “Testing HAMR was uneventful” because the drives just plug in and work, and unit effectiveness rates were the same as any generic pre-release sample hard drive run. The customer did not need to do anything special with the drives, they were plug and play, and they met all expected standards.

Welcome to the future of high-capacity hard drives.