CWDM vs DWDM | Difference between CWDM and DWDM

By TRUECOSMOSMarch 15, 2019NEWS
No Comments Figure-3 depicts spectrum of CWDM and DWDM technologies. As shown DWDM spectrum will have tighter wavelength spacing between the channels compare to CWDM counterpart. Following table compares the two. 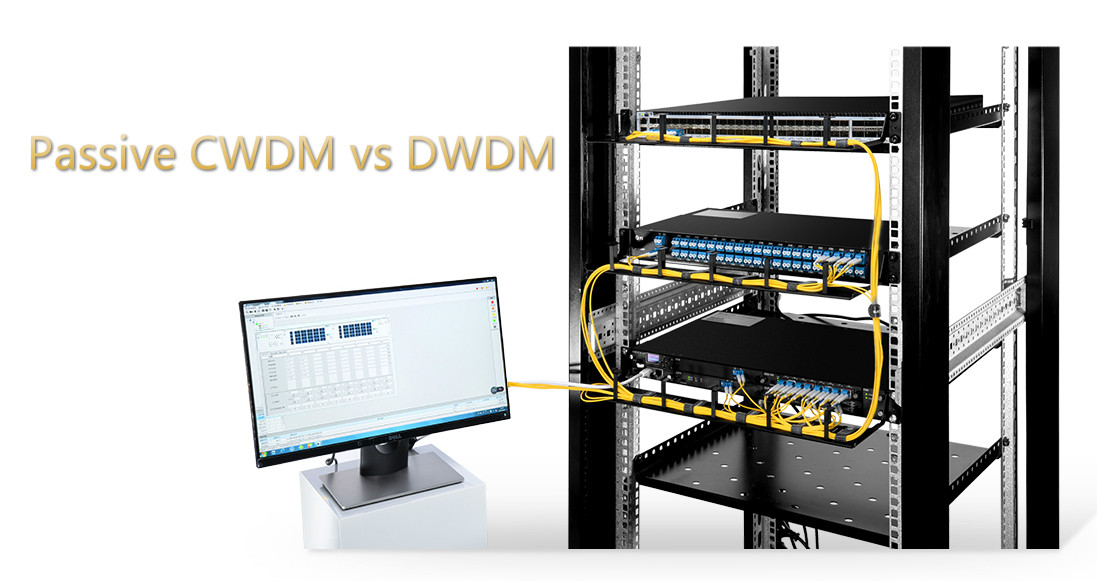 What Is Passive CWDM?

CWDM is often employed in situations where only a few channels are needed and there is no need for distances longer than 70 km. The passive CWDM is an implementation of CWDM that uses no electrical power. It divides the wavelengths by passive optical components like bandpass filters and prisms. Most CWDM devices are passive. CWDM Mux Demux is the most commonly used device in passive CWDM system.

What Is Passive DWDM?

DWDW technology is used for long haul optical transmissions. It can be divided into two different versions: an active solution and a passive solution. The active solution is a good fit for applications involving more than 32 links over the same fiber. Passive DWDM solutions have fewer active elements, in other words, the solutions have higher reliability and less latency. In a passive DWDM network, the line functions only due to the use of optical transceiver. Passive DWDM systems allow to arrange a high speed system with high channel capacity, but the transmission distance and management are limited. The major applications of passive DWDM system are metro networks and high speed communication lines. 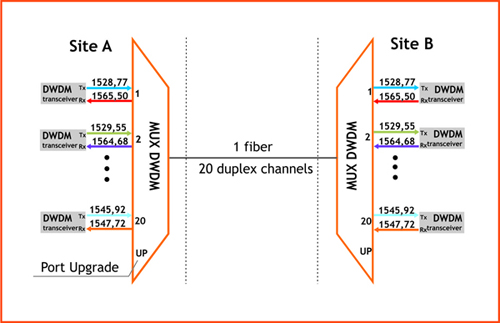 Passive DWDM and CWDM are based on the same concept of using multiple wavelengths of light on a single fiber. Both of them require no power and are easy to employ. However, they still differ to each other in some aspects. The following will describe some differences between passive CWDM vs DWDM.

Passive DWDM supports more channels than passive CWDM. The former can provide up to 80 channels while the latter just supports up to 18 channels.

Actually, the cost is associated with the deployment of the system. In general, the passive DWDM devices are more expensive than that of passive CWDM systems. But the passive CWDM is just cost-effective for the connection rates below 10G and for short distance.

After the comparison of passive CWDM vs DWDM, we can see that each one has its advantages and disadvantages. Which to deploy depends on the actual needs. Hope what we discussed in the article could help make an informed decision. If you want to know more details, welcome to visit FS.COM.

CWDM SFP vs DWDM SFP – Which One Suits You Better?

SFP (Small Form-Factor Pluggable) is designed to meet Multi-Source Agreement (MSA) standards to ensure network equipment compatibility. Recently, wavelength-division multiplexing (WDM) technology is warmly welcomed by internet users all around the world. It is a technology that multiplexes a number of optical carrier signals at different wavelengths of laser light over a single optical fiber. By using WDM technology, SFP modules will have different wavelengths assigned to them. The following passage will focus on the brief descriptions of the two types of SFP modules: DWDM vs CWDM.

CWDM SFP is a kind of optical transceiver that utilizes CWDM technology. Similar with traditional SFP module, the CWDM SFP is a hot-swappable input/output device. It plugs into an SFP port or slot of a switch or router and links the port with the fiber-optic network. CWDM SFP transceiver modules make use of the SFP interface for connecting the equipment and use dual LC/PC fiber connector interface for connecting the optical network. Colorful CWDM SFP modules are displayed below.

It is well known that CWDM SFP modules come in 8 wavelengths covering from 1470 nm to 1610 nm. Color markings on the devices identify the wavelength to which the Gigabit Ethernet channel is mapped. The following picture lists the CWDM SFPs with their wavelengths and color codes.

DWDM (Dense Wavelength-Division Multiplexing) SFP transceivers are used as part of a DWDM optical network to provide high-capacity bandwidth across an optical fiber network, which is a high performance, cost-effective module for serial optical data communication applications up to 4.25Gb/s. There are 32 fixed-wavelength DWDM SFPs that support the International Telecommunications Union (ITU) 100-GHz wavelength grid. An inner structure of DWDM SFP is shown below.

CWDM SFP transceiver is widely used in optical communications for both telecommunication and data communication. It is designed for operations in Metro Access Rings and Point-to-Point networks using Synchronous Optical Network (SONET), SDH (Synchronous Digital Hierarchy), Gigabit Ethernet and Fibre Channel networking equipment. The DWDM SFP can be also used in DWDM SONET/SDH (with or without FEC), but for longer transmission distance like 200km links and Ethernet/Fibre Channel protocol traffic for 80km links.

Which SFP Module Type Should You Choose: DWDM vs CWDM?

From a low-cost point of view, the CWDM SFP module is inexpensive than DWDM SFP. It provides a convenient and cost-effective solution for the adoption of Gigabit Ethernet and Fibre Channel. On the other hand, the key in selecting DWDM vs CWDM SFP modules lies in the differences between CWDM and DWDM. They refer to different methods of splitting up the light. For example, CWDM uses broader spacing between channels, allowing for inexpensive SFPs, and DWDM uses denser channel spacing, which allows for more wavelengths to be used on a single fiber. DWDM is typically used in large optical networks over the longer distance. Thus if you are looking for SFP modules over long distance and with better scalability, DWDM SFP module is the ideal choice.

I hope this brief introduction to DWDM vs CWDM SFP modules is helpful for you to make a choice in selecting them. Based on the Cisco CWDM SFPs, FS CWDM SFPs are multi-rate transceivers, supporting data rates from 100 Mbps up to 4 Gbps. Besides, they support transfer distance at 20-40km, 40-80km and 80-120km in different colors, diversely satisfy the requirements of clients. All the DWDM SFP modules meet the requirements of the IEEE802.3 Gigabit Ethernet standard. They are suitable for interconnections in Gigabit Ethernet and Fibre Channel environments.

How to Add CWDM MUX/DEMUX System to Your Network?

Coarse wavelength division multiplexing (CWDM) technology is developed to expand the capacity of a fiber optic network without requiring additional fiber. In a CWDM system, CWDM Mux/Demux (multiplexer/demultiplexer) is the most important component. Usually, a CWDM Mux/Demux is used to increase the current fiber cable capacity by transmitting multiple wavelengths, typically up to 18 separate signals over one fiber. This article may mainly describe what is Mux in networking and how to install your CWDM Mux/Demux system. Unless you are an experienced user, we recommend that you follow the detailed installation steps described in the rest of this article.

What IS MUX in Networking?

How to Add CWDM MUX/DEMUX System to Your Network?

After knowing what is MUX in networking? Next, we’ll learn how to install a CWDM Mux/Demux system, there are four basic steps:

The CWDM rack-mount chassis can be mounted in a standard 19-inch cabinet or rack. When to attach the chassis to a standard 19-inch rack, ensure that you install the rack-mount chassis in the same rack or an adjacent rack to your system so that you can connect all the cables between your CWDM Mux/Demux modules and the CWDM SFP transceivers in your system.

To insert a module, you should align the module with the chassis shelf (shown in the figure below) first and then gently push the module into the shelf cavity. Finally, tighten the captive screws.

After inserting the CWDM SFP transceiver into the switch, then we should use the single mode patch cable to connect the transceiver to the CWDM Mux/Demux.

What is MUX in networking? In summary, Mux/Demux system is a cost-effective solution which is easy to install. CWDM Mux/Demux, CWDM multiplexer only, and CWDM demultiplexer only are a flexible, low-cost solution that enables the expansion of existing fiber capacity and let operators make full of use of available fiber bandwidth in local loop and enterprise architectures. Fiberstore CWDM Mux/Demux is a universal device capable of multiplex multiple CWDM (1270~1610nm) up to 18 channels (2, 4, 5, 8, 9, 16, 18 channels are available) or optical signals into a fiber pair or single fiber. Together with our CWDM transceivers or the wavelength converters, the bandwidth of the fiber can be utilized in a cost-effective way.